In this latest video, CASEC, one of our partners in Tanzania, highlight the incredible impact our ‘Girls’ Dormitories’ project is having on girls’ education in the region, all thanks to funding from you.

“Life in the ghetto is very challenging. After school hours you become a mother and father because no one is there to support you. At night it is not safe because anytime someone might knock at your door” – Celina Philemon, a form four pupil in Mbulu Region, Northern Tanzania.

Life in the Ghetto

Celina, like so many other girls at Mwanafunzi Daudi Secondary School, lives a long way from her school. Like so many others, she was forced to walk the many miles to and from home in order just get an education. Her days started early at dawn, yet she would often arrive late at school, already tired and unfit to study.

By the time Celina returned home it would be dark, so to avoid this she ended up staying in poor accommodation in an unsupervised ghetto near to the school. Already forced to cook, clean and look after younger siblings, there she encountered a whole host of new challenges too: village men grooming young girls for sex, endemic rates of HIV and AIDS, pregnancy… and certainly no electricity or a safe place to study.

Such a situation was unacceptable for Alfred Sakafu, Director of the Community Aid & Small Enterprises Consultancy (CASEC) , so in 2008 when he saw first-hand the daily challenges school girls faced he decided to do something about it. Working with local schools in two districts, Mbula and Kilolo, he set about to provide a safe place for girls to stay.

CASEC’s project would create new dormitories where young girls could be protected, supported and given opportunities both to study and to rest. At African Initiatives we were keen to throw our support behind this powerful tool for change.

As this new documentary highlights, when girls move into dormitories supported by CASEC and African Initiatives their lives change. More girls than ever enrol in school and are less likely to drop out because they feel safe. They have three meals a day which improves their health and concentration. They have more time to study and support each other, and they achieve better academic results: girls at Ukwega School held the top six places in their class in their National Form 2 exams.

In turn, educated girls have more life choices, they are more likely to get a well-paid job, marry later, understand family planning, and put the money that they earn back into their families. Educated girls mean educated families and educated communities.

“After the CASEC intervention we have witnessed an incredible impact. They helped us build dormitories. Now students don’t have to walk long distances daily. Now they stay in a safe place and there is time for studies”, says Fotunatus Fwema, District Education Director.

Thanks to support from African Initiatives and other international partners including the Waterloo Foundation the project has already seen the construction of 23 dormitories (with 1,260 beds). Providing these opportunities to all girls in these two districts in Tanzania is our aspiration. A further 22 dormitories are in construction. The final number of beds will be 2,372.

It’s hard not to be moved by Lucy Samweli, pupil at Mwanafunzi Haydom Secondary, when she tells us in the video: “Before I got to the dormitory my learning environment was very difficult. When I came here I saw many, many changes concerning my studies.”

“For the people who have contributed to build the hostels I am giving them many thanks because they help us to get more time to read. I congratulate them because they decided to help us.”

Your support has made a difference.

Still more to do

Although the number of children enrolling in secondary school in Tanzania is increasing nationally, girls remain disadvantaged with far fewer girls enrolling than boys. There is, however, a growing demand since the introduction of universal primary education.

Ward or community secondary schools are being built by communities with the Government paying teachers’ salaries and providing roofing materials as well as finance for doors, windows, and plastering for classrooms.

We continue to push to increase girls’ enrolment rate and to provide secure accommodation for more girls. 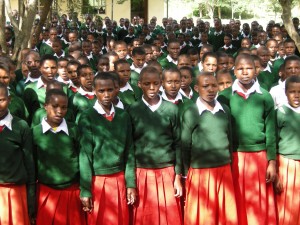 If you have been inspired by this video, please help African Initiatives change more lives for the better by donating online or by text (AFIN£5 to 70070).

We’ve already achieved great things with the dormitories project, but with your continued support we can achieve a whole lot more.

He Who Works Fast – a year in Tanzania