Overseas Programme Coordinator, David Baines, talks about improvements in access to education during his monitoring trip to 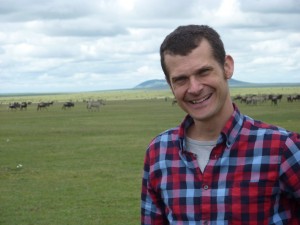 Dar es Salaam, the commercial capital of Tanzania, is a huge city of over 4 million people. I fly in on a Monday afternoon, via Addis Ababa, and I am immediately struck by the noise, the strong wind, the sand and humidity and of course the relentless traffic. I am met by our Tanzanian partners who joke about how it was much hotter last month.

We visit the Tanzanian Educational Authority to talk about the educational projects which African Initiatives is supporting. These are projects which promote and support access to primary and secondary education for children, especially girls. The government has recently launched a new set of development strategies under the catchy title of ‘Big Results Now’. There’s certainly a lot to do.

In 2005 the Tanzanian government set out to provide local secondary education across the country. Each administrative ‘ward’ was to have its own secondary school. A ward, or shehia, is the lowest government administrative structure at the community level and usually represent between 1,000 – 21,000 people. Rural wards are composed of several communities. Urban wards represent a single town, or a portion of a larger town or city.

Over the next 4 years over 3,000 secondary schools were built, one per ward. Construction focused on the classrooms first and foremost. Generally they are located in the geographical centre of a ward, to give equal access to all students. This also places them out in the ‘bush’ where children (and teachers) have to walk sometimes many kilometres to school and back every day.

These schools are known as ‘Community Supported’ government secondary schools. They are the majority and poorest of secondary school infrastructure. The concept is that after central government investment in the basic classrooms the community and local district level authorities will contribute to provide further facilities such as water, electricity, teachers’ accommodation, library, science laboratory, furniture etc. Staffing continues to be the role of central government, but everything else has to come from the community and local district level authorities.

The long walk to and from school exposes many girls to physical and sexual abuse. Often they are forced to take basic rooms in make shift temporary accommodation located near to schools – known as the ‘ghettos’. In ghettos they are not safe, they regularly fall ill, and their time is consumed by daily household chores such as collecting wood, cooking and cleaning. 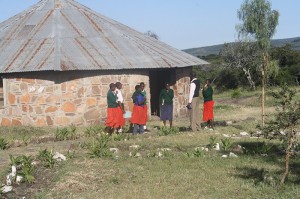 African Initiatives and our partner have been supporting over 40 communities to build dormitory accommodation next to their secondary school. This provides girls with safe and secure accommodation where they can focus on their studies. To date over 1,200 girls now have dormitory accommodation. By the end of construction this will have increased to over 2,300 girls. The issue of girls’ dormitories has been raised at a national level with promising signs that central and regional government is becoming more involved.

We take a coach from Dar es Salaam on the coast to Iringa in the Southern Highlands, a trip of eight and a half hours. The road is good. The coach shows music videos, a popular Tanzanian comedy show, and then American and South African films. We buy food through the coach windows and constantly widen or shut windows as we travel depending on the speed of the coach.

From Iringa we go on to the district of Kilolo, a beautiful area of rolling hills dotted with huge granite boulders, the occasional enormous cacti, widespread forestry and small scale agriculture. It is dry season and the Baobab trees are bare, the grass golden, and the Jacaranda trees are flowering brilliant purple.

We visit the Kilolo District Authority where we share and compare notes and statistics. Together we are tracking the number of boys and girls enrolling into secondary education (which is not compulsory), their retention in school (and the reasons for their dropping out) and their achievement in national level examinations.

Over recent years access to secondary education for girls has improved, with over 3 times as many children going into secondary school today, but the pass rates for both boys and girls is low. Between 40% and 70% of students don’t pass their Form 4 (GCSE equivalent) examinations. The pass rate for girls is half that for boys.

African Initiatives has been supporting girls and boys in school through the formation of Health Clubs. Health Clubs have one or two adult ‘Guardians’, often themselves teachers, and they elect their own leaders, secretaries, chair persons and treasurers. Clubs receive training on a range of health issues including HIV / AIDS and life skills. Members share this information with other students through peer education. Regular sports activities and events help students to stay active and positive.

Recently clubs have also started to implement projects around the school grounds such as establishing vegetable patches, planting fruit trees and building chicken houses. The intention is to sell produce to the school, and so develop their own fund with which they can print t-shirts and visit other schools in the area. Clubs often pass on information and key health messages through performance.

I visit six schools in Kilolo all of which have both girls’ dormitories and active health clubs. Students and teachers alike are very positive about the projects. Girls especially talk about how their studies have improved. Their aspirations are high. Education is their chance to make a better future for themselves and their families. It is very encouraging to see the change which such projects can make to the lives of young people.

Childreach Tanzania and Fit for School