Today, 10th December 2014, marks Human Rights Day across the globe. Catherine Phillips – talented guest blogger, mother and compassionate writer – shares her thoughts on the day, with a reflection on the recent land rights issues faced by Maasai communities in Tanzania:

When my day goes badly, or is simply lasting longer than I would like, I look forward to coming home. Sometimes I look forward to it just moments after leaving it, sometimes I’m happy to stay away for longer periods, having adventures, seeing friends, sharing experiences. But I know it’ll be there for me whenever I’m ready to return to it.

This is the place I can be free. It’s where my loved ones are and where all my comforts are moulded to my likes. I don’t have to answer the phone or the door if I don’t want to. I can retreat inside my sanctuary.

The Maasai in Tanzania recently faced a proposed eviction from their land to make way for a commercial hunting ground for Arab royalty. An international outcry led to an online campaign that prompted the president of Tanzania to tweet: “There has never been, nor will there ever be any plan by the government of Tanzania to evict the Maasai people from their ancestral land.”

The quote was met with celebration from the activists that had led the petition against the proposal during a two-year fight.

Two years of living with the threat of losing their land; their home. Two years of feeling powerless, frustrated and unsure of the future.

The Maasai know the value of their land and that those who want it will come again with a higher price. They want permanent rights, in writing, so they can feel safe that the home they belong to and love will remain theirs.

African Initiatives works with grassroots organisations in Tanzania, such as the Ujamaa Community Resource Team (UCRT) who help marginalised groups secure the rights to their land, and the Pastoral Women’s Council who work to empower Maasai women and children.

With the support of our partner organisations, land use planning and village land certificates have been obtained by the Emboreet and Namalulu communities, securing 1,735 sq km of village land directly benefiting 3,679 men and 4,585 women. Of course, there is much work still to be done.

It’s easy to forget the importance and significance of this day – Human Rights Day. The United Nations Declaration of Human Rights has been criticised for having a Western bias and, of course, we see and read about human rights violations every day. 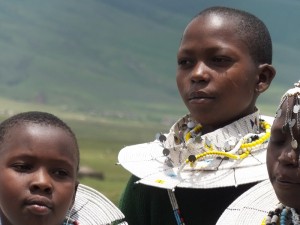 A girl wearing traditional Maasai jewellery at Bulati School in the Ngorongoro district of Tanzania.

However, the idea that we have a shared humanity is a valid one. You don’t have to live on the Maasai’s ancestral lands to understand and empathise with the prospective loss of your home, the relocation of your family and the disconnection from your roots.

On this Human Rights Day write down what the words ‘home’, ‘community’ and ‘empowered’ mean to you. I guarantee your answers will be universal.

Enjoyed this blog? Read more of Catherine’s stories on her blog Walking With Women.

Read more about African Initiatives’ work with the Maasai here.