“In the first half of the Spring Term, the children wrote their own mini ‘Tanzania Project’. The children wrote chapters about ‘The Big Five’, ‘Tanzanian Food’ and Tanzanian Geography’ and were also able to choose to write a chapter about a subject of their choice. A lot of the children included information about education for girls in Tanzania, as they had gleamed information about it from a fantastic workshop that African Initiatives had delivered to introduce the children’s project work for the half term. After the workshop, the children decided that they would like to hold a cake sale to raise money to sponsor a child’s education for a year. The class teachers thought that this was a great idea and fully encouraged the children’s enthusiasm! 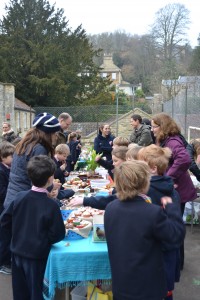 After school on a Tuesday 26th February from 3-4.30pm our two Year 4 classes (and parents!) organised and ran a cake sale with cakes that they had made and brought in from home. It was featured on our website.

Year 4 at Paragon School are sponsoring two Maasai girls in Tanzania who would otherwise not be able to afford to attend secondary school. Naishowra S. Kilayo, eldest of 7, who wants to be a teacher and Soola Koriata, 14 years old, one of 17 children (her father has 4 wives) who would otherwise have been married off. Soola is now one of the 10 best students in her class.

Watch 4 sponsored girls talk about their dreams for the future

Nebiang ‘eti Paulo ran away to school rather than be married off. She is now being sponsored through this school year. Watch her interview here

Another Brick in the Wall Update

Thank you to everyone who attended our conference